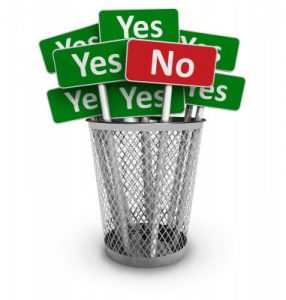 When I listen to my disability and work comp claimants use the phrase “rejection letter” to describe an email they received explaining that they were not chosen for a job, I often have the following conversation with them.

First, I tell them to understand that they were not “rejected”.

I explain to them that:

·        “NO” doesn’t mean the employer isn’t hiring you because they secretly know you have a disability.

·        “NO” doesn’t mean that you are bad candidate and should not have applied for the job in the first place.

I further explain that:

·        All “NO” means is that someone else had better qualifications than you this time around.

Recently, the word ”NO” allowed a claimant of mine the opportunity to prove to the employer that he was, in fact, the right choice for the job. Upon receiving his “rejection” letter, he called the highest level contact that he had made during the interview process and re-sold his qualifications, told them that he still believed he was the right person for the job and asked them to reconsider his qualifications. The employer then called him back stating, “Calling us back and not taking “NO” for an answer took confidence and guts. Personally, I thought you could do the job but there was one person on our team that didn’t—your call changed his mind.” Two days later my claimant was offered that same job because of his proactive approach to not taking “NO” personally.

Remember: No really means “not today” and might even help you turn a rejection into a job offer.